Cult of the Dragon

"It is disconserting, but not a problem. Kill them for me, Petra. Both of them."
-Susarro

Señor Susarro, as he is known to his peers, is a mysterious figure-head of the recently resurrected Cult of the Dragon that rose from the ashes of the Neo-Templar Order.

According to Madam Zazie, Susarro's appearance is described to have skin-like bone and eye blocked stare. He also shows as a man without compassion, without mercy and have no soul as evidence to the scene where he killed Professor Dudley Cholmondely and then later to the Templars of St. Stefan Chapter. As a leader of the new cult, he insists his army and followers to address him as "Señor Susarro". Despite his cruelties, he's somewhat values his henchmen eventhough he hates to see them failing his orders. He's also affectionate to Petra hence he often calls her as his "dear" and praises her ideas in punishing their enemies.

Some time after the Grand Master's death, Susarro took over the Neo-Templars Order and renamed it Cult of the Dragon. He controls the rest of its members by force and whoever opposes him will lead to death. During his leadership, he discovers the Dragon Power and managed to control it. It didn't last long because the power weakens his body and suffers from dying.

He is first appeared in Congo interrogating Cholmondely. He asks the scientist about the power source as well as Bruno's whereabouts. With the scientist refusing to answer, Susarro orders his henchman to kill him.

While in Glastonbury, England, George Stobbart rushes to save an old man from a burning building; the old man turns out to be Bruno Ostvald and a former Neo-Templar. He claims that the Neo-Templars have been taken over by a man named Susarro, who renamed it the Cult of the Dragon. It is revealed that Susarro is the pale man who killed the scientist Dudley Cholmondely in the Congo. The old man says that Susarro seeks to gain immortality through the use of the Earth’s ley lines.

While George and Nico are in Congo to search another stone, Susarro orders his agents to capture Bruno who is in Nico's apartment. The agents bring Bruno to Susarro's castle in Prague. At Prague, he interrogates Bruno about the Key of Solomon but Bruno tells him that he doesn't have it and have no idea who stole it. Susarro warns Bruno that he'll ask Petra to torture more if he doesn't tell the details. Petra arrives at the office from the secret door and tells Susarro that she failed to capture George and Nico. She also tells him that Flap has found something in Paris. Flap enters the office much to Susarro's dismay and tells that the picture of the castle is stolen by Nico. Susarro then looks at the blue scarf that Flap is wearing. Amazed at the discovery of the symbol embroidered at the scarf, Susarro decides to change his plans by going to the headquarters of St. Stefan Chapter of the Knights Templar in Paris and retrieve the key.

"The cavalry. How tiresome. Flap, kill them!"
-Susarro

Susarro goes back to Paris and orders his soldiers to go to the St. Stefan Chapter Headquarters and kill the Templar members. He managed to get the key back and goes to Egypt. He brings Bruno to the temple to run the ancient machine using the key while Flap is guarding at them. While Susarro forces Bruno to activate the machine, George and Nico arrive from the other door. Susarro hears the loud noise coming from the door and finds George and Nico. He tells Flap to kill the duo but it is stopped when George starts to tackle the gond. Flap's gun is dropped at the floor and Susarro attempts go grab it. Unfortunately, George kicks the gun away and knocks Susarro out cold. George and Nico are glad to find that Bruno is safe but Nico tells them that they still have to find Petra. Petra is standing at the side and points her gun at them. Susarro wakes up and tells Petra to kill them. However, Petra tells Susarro that she's not talking to him but points out the hooded figure above. It turns out that the hooded figure is the Grand Master who survived the explosion from the first game. Susarro is shocked to see the Grand Master alive and betrayed by Petra who turns out to be a spy. The Grand Master tells Susarro that he'll get the Dragon Energy as a fair consequence for stealing the organizion. Susarro, however refuses and says he's not going to follow the Grand Master again. As a punishment, Susarro is killed by the Grand Master by shooting the lighting from the hands. 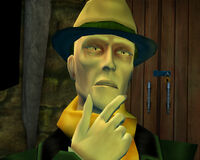 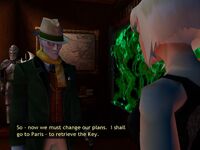