Broken Sword Wiki
Register
Don't have an account?
Sign In
Advertisement
in: Enemies and Nemeses, Characters, Broken Sword: The Sleeping Dragon,
and 8 more

Cult of the Dragon
Neo-Templars

Petra is a professional assassin working within the ranks of the Neo-Templars before and after their initial destruction at the hands of George Stobbart and Nicole Collard.

She is a reputed sadist and regards her occupation as an art form. She's soft-spoken, cunning and doesn't waste time in having too much conversation with her enemies. She's also capable to do impeccable manners. Some characters, even George thinks that Petra looks like Nico. She wears a black tank top and pants. She has a tattoo of the Cult of the Dragon symbol which is located on the right side of the her belly. Her primary weapon is a magnum, which she fondly looks and strokes it but prone to jamming whenever she tries to kill George or Nico.

Broken Sword: The Shadow of the Templars - Director's Cut

During Nico's interview with Pierre Carchon, Petra heads out to Nico's apartment. She slips to Nico's room easily using the copy of a key she stole in the apartment and puts a small metal disk to Nico's chest. The disk itself is used to track Nico's activities inside her apartment and gathers vital information for Pierre's organization.  The next day, Fleur informs to Nico that her "cousin" from Marseilles visited her room. Nico is suspicious about it and realize that her "cousin" hide a bug in the chest.

Petra now works for a mysterious man named Susarro who has seized control of the Neo-Templars remnants and christened himself the new Grand Master, as well as re-christening the Order as the Cult of the Dragon. She is first encountered by Nico Collard when she goes to interview a known code-breaker by the name of Vernon_Blier. Having got to Vernon first, Petra pretends to be Nico by wearing a black wig which, along with their similar facial characteristics, makes her look like Nico in an attempt to gain entry to Vernon's flat. Having received the the Voynich manuscript information from Vernon, Petra kills him as he is no longer of any use to the Order and she does not want him to divulge any of the vital information to anyone else. Knowing Nico is coming Petra hides in the kitchen, behind the fridge and waits for an opportune time to engage the journalist. Despite having the element of surprise over Nico, Petra is unable to kill her due to Nico's quick-thinking of using a frying pan and fridge door as a defence and matters are made worse when Petra's Magnum jams. Thinking on her feet, Petra escapes out of the nearby door with an incredibly angry Nico in hot pursuit but not before revealing to Nico that the two have met before.

Petra is then encountered in an abandoned theatre in Paris by both George and Nico who, at this point, are not aware they have a common enemy. Nico is the first to greet her as she accidently crushes a paper cup while she is hiding and is forcefully restrained to a chair and interrogated by Petra. Luckily for Nico, a disturbance downstairs causes Susarro and Petra to leave her to be watched by Flap and she is soon rescued by George. George and Nico move through the theatre and end up attaining a mysterious key from a beam of energy in the catacombs beneath the theatre. On their way out they hide on the ledge of the catwalk, due to Nico noticing the elevator coming up to their level, and out steps Petra and Susarro mere feet away. Unable to hold on much longer, George and Nico climb up behind the two villains and try to escape but are noticed by the pair and almost shot by Petra before her magnum jams yet again. Petra then chases the two but is unable to catch them before they reach the elevator and escape. Her attempts to use the same elevator are blocked by George who stops the doors from closing, thereby preventing the lift going down.

Petra is next encountered in the Congo when George and Nico go back to search Dudley Cholmondely's residence and retrieve an important key. Just as George and Nico are about to leave the cavern, after avoiding many death-traps and dangers already, Petra appears on a ledge above them demanding that they give the key to her. Just as she is about to pull the trigger an earthquake commences and she is thrown backwards, allowing George and Nico to escape once again.

Petra next appears in Prague at the latter stages of the operation before Susarro moves the plan to Egypt. Having been delayed from arriving at the mansion before George and Nico, Nico is able to assume Petra's identity in an ironic twist that further prevents Petra from meeting with Susarro and Bruno on time. After finally arrived and preceding to Susarro's office, Petra threatens to torture Ostvald slowly if he does not reveal the location of the Armillary. Moments away from doing so she is stopped when Susarro notices the symbol of the St. Stefan's chapter of the original Knights templar on the scarf Flap is wearing. This gives him a brain-wave and he adjourns the meeting to further his plans; Petra, Flap and Bruno go with him.

George and Nico travel to Egypt hot on the trail of the villains and arrive at a heavily guarded Armillary. Venturing through even more dangerous rooms the protagonists finally find Susarro and his crew, the heroic duo try to silently creep up on the villainous trio and gain the upper hand with the element of surprise but the door slams shut loudly behind them and so a chaotic struggle ensues. Flap is tackled by George and knocked out but Susarro and Petra regain control of the situation by use of guns, Bruno is forced to activate the machine and the exact location of the dragon energy convergence is revealed. Petra then asks what she should do with the two heroes, to whom Susarro replies that she should kill them, she then reveals that she hadn't been talking to him and points out the hooded figure above them. The figure reveals himself to be the original Grand Master of the Order and promptly eviscerates Susarro with lightening shooting from his hands, which is a power that had be acquired during the ritual in the first adventure. Now aligned with her true master; Petra leaves George, Nico and Bruno to die in the tomb.

During the climax of the adventure, Petra is encountered again for the last time when George and Nico travel to Glastonbury to stop the Grandmaster. Standing at the foot on the Tor, Petra dares the duo to face her without weapons and Nico is only too happy to oblige. Petra is next seen engaging Nico in combat before the dragon unleashes a fire-bomb, meant for George, at them. After the dragon is defeated, it is revealed that Nico had survived the explosion as she had been knocked out and that it was Petra who has taken the brunt of the damage. Seeing her master defeated, yet again, and knowing she can no longer stop George and Nico, Petra vanishes without trace as the heroes are distracted with each other’s survival. Petra's whereabouts is currently unknown.

"I've been waiting for a long time for a chance to do this!"

"You won't be so clever when I kill you."

"If anyone who tries to follow us, I will kill them in a heartbeat."

Nico and Petra in the kitchen

Petra still not giving up

Petra with the gun 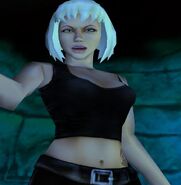 petra with her gun

Petra during the epic conclusion to the adventure