The Monatomic Gold (Also named as Mfkzt, see in “Trivia”) is first mentioned during an interview to Dr. Ronald Maynard at his research facility labs, Phoenix, Arizona. He explains how he has managed to create this special powder that kills people, but saves them too. Stops disease - but wipes out millions.

From traces of white powder found in the desert of Phoenix, Dr. Maynard has succeeded in recreating the substance in his laboratory. Lots of it, to sell it to the highest bidder. His discovery can transform mankind. It can be used to fly, heal wounds, and even project into another universe! But in the wrong hands, it can be deadly.

It is later revealed that the Order of St. Michael is the one funding Dr. Maynard’s facility in exchange of Monatomic Gold for devastating purposes. The Order is going to use it as fuel for the Ark, to summon the Angel of Death and “save” the Christendom of the unworthy. 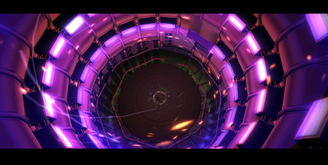 Traces of Monatomic Gold found near the wafer's machine.

The Order of St. Michael about to summon The Angel of Death.