Broken Sword Wiki
Register
Don't have an account?
Sign In
Advertisement
in: Characters, Enemies and Nemeses, Male,
and 4 more

Mevlut, as he is known to his peers, is an undercover Turkish secret service agent who crosses paths with George Stobbart during his investigation into the "Angel of Death Conspiracy" .

He is after George because of his connections with the mafia. He at first goes under the guise of a waiter at the Pasha Palace Hotel. He later helps George escape from jail by disguising himself as a priest (Father Nicholas), realising he is the key to finding The Ark . He appears once more during the climax of the adventure to try and collect the ark, but is shot by Anna-Maria who in turn is shot by Mevlut. 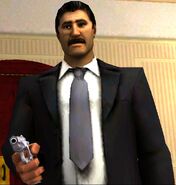