Broken Sword Wiki
Register
Don't have an account?
Sign In
Advertisement
in: Broken Sword: The Shadow Of The Templars, Items, Manuscript, Map 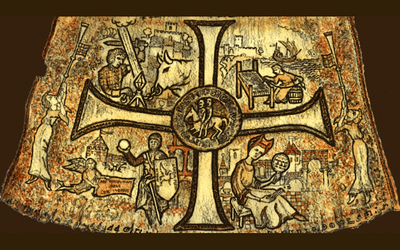 The manuscripts are one of the key elements in the Broken Sword series. Most of the time it represents the starting point of the adventure, that George and Nico try to decypher, hence the need to travel worldwide to gather clues. 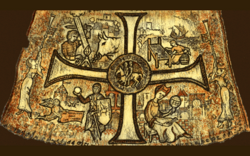 The ancient Templar manuscript in Broken Sword: The Shadow of the Templars 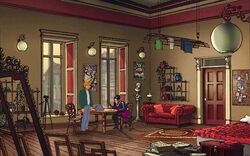 George and Nico are looking for clues

The only manuscript that is featured in the game is called Voynich Manuscript. However, it is only mentioned by Vernon Blier the hacker responsible for decoding it. According to Vernon in his DVD message, the manuscript contains strange texts about the end of the world. Besides the prediction, it also has a message that translates as "Devils and witches dancing around with cows on the Sabbath" and a diagram that looks like a map of Ley lines.

This manuscript is Templar-related. It was made in 1307. According to Maynard it was egyptian. It shows where the Cherubs are hidden.

It represents an Old Citadel of Constantinople, now Istanbul, on the east. Saint George, the patron saint of England, is depicted as fighting a dragon.

There is also a representation of Baphomet.

The first Cherub lies in Istanbul, Turkey, beneath the Topkapı Palace. The second Cherub is below the temple of Mount Horeb. 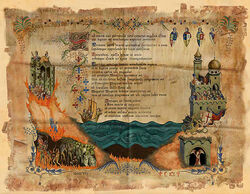 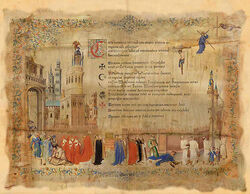 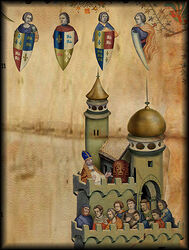 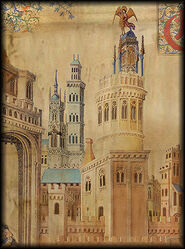 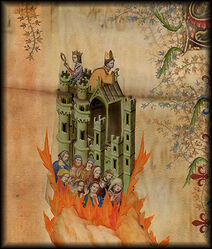