Broken Sword Wiki
Register
Don't have an account?
Sign In
Advertisement
in: Characters, Enemies and Nemeses, Male,
and 6 more

The Grand Master was the leader of the Neo-Templars cult. His main goal is to acquire the power of Baphomet and use it to take over the world.

According to Bruno, the Grand Master is cold, methodical planner, which makes him all the rages be more dangerous. He is also described as vain, but knows and guards it against vanity being his downfall. He is feared among his followers for his malevolence, ruthless and capable of profound evil. Using his experience from working in business, he manages to convince a lot of rich and influential people to join at his side. If any of his members failed or betrayed the Order, he will use one of his assassins to kill them.

The Grand Master, as well as other five members of his organization meet at the catacombs in Montfaucon sewers. He gathered them to discuss their findings about the Sword of Baphomet and Klausner 's disappearance. He's disappointed about their progress especially their enemy, the Hashashin beat them in finding the manuscript. Before the members separate their ways, the Grand Master tells them that their meeting is their last until they find the sword. They leave the catacombs by boat.

At St. Ninian's Church , he gathers his members to conduct the ceremony. He was struck by blue lightning from the Baphomet statue and receive its powers. After the ceremony, the Grand Master encourages George to join his cult for being a resourceful man. However, George refuses when he realizes that the dead members are considered as failures. Leaving him no choice, the Grand Master orders his group to kill George and Nico. Moments later, he warns Guido that the gunpower is ancient and it can make a huge explosion. The church explodes and George and Nico escape safely. The Grandmaster, among many people, is supposed to be dead, but...

The Grand Master seems to have survived his encounter with Stobbart from the first game, having been saved and healed by Petra who turns out to be his agent. The left-side of his face is badly burned but he has mastered the power of the Broken Sword and consequently received new deadly powers such as the ability to shoot dragon energy, in the form of lightning, from his hands.

He is appeared behind the pub as a hooded figure and caused the fire. He left Bruno there to die for being a traitor as well as to stop Susarro from fulfilling his plans. He appears again in the abandoned theater in Paris and kills several of Susarro's soldiers. He looked at George above while George is confused about the situation until Nico tells him that Susarro and Petra are going up using the elevator.

At the Armillary, he shows up  at the top of the pillar after Petra pointed her true master. Surprised from seeing familiar faces, the Grand Master tells them that he returns to take the Dragon Energy and rule the world once again. He is angry at Susarro from stealing the organization and as punishment he kills Susarro by shooting the lightning from his hands. Before he and Petra left the temple, he set up the bomb to destroy George, Nico and Bruno.

Traveling to Glastonbury , he stands near at Glastonbury Tor waiting to receive the Dragon Energy. George arrives and warns the Grand Master that the power will cause to kill everyone. The Grand Master doesn't listen and he's more concentrated on getting the energy. As a result, he is transformed into a dragon by the earth energy and defeated by George using the legendary sword Excalibur.

"Excellent. The tired old governments are dying a slow death from their own imcompetence and our machinations."

"The Millenium is almost upon us and everything is in place for the rise of our New Order".

"With the Sword reforged, we will have the power to sweep the stage of all opposition. The New Millenium will belong to us!"

"The next time we meet, it will be to become the Princes of this World!"

"She was talking to me, Susarro!"

"So many familiar faces. I'm quite attached."

"I'll give you all the same chance George and Nico gave me when we last met."

"The Energy of the Dragon is upon us. I can see everything! All of history! All Creation! The future!"

"With the power! I shall live forever!"

The Grandmaster in his ceremonial garb (BS1) 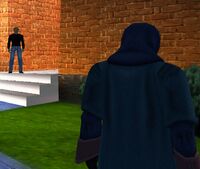 The Hooded Figure encountered in the Armillary (BS3)