Sir George Stobbart (born 1968, Idaho, USA) is the main character in the Broken Sword adventure game series by Revolution Software. George currently lives in New York City, USA and works as a bail bondsman. He is a patent lawyer by profession although struggles to find work within such a competitive industry. He enjoys traveling and is fascinated by history. George is estimated to be 28 years of age (as of Broken Sword 4). His trademark appearance consists of blond hair, cut short in the back but left long in the front, as well as jeans with incredibly deep pockets and a blue-green jacket over a white t-shirt.

Little is known about George's private life. From conversations throughout the series we know that he is a graduate of law, which he studied at either the University of California or the University of Idaho. He has worked in California, at his father's law firm, and New York City, as a bail bondsman. He is an only child and his father passed away between the first two games (1996-1997).

He has a very sarcastic outlook on life, with a dry wit and casual approach to things around him. This does serve him well in a crisis though as he can think fast and doesn't panic.

George is a friendly, positive individual who always tries to see the good in any situation. Although good natured and honest, he could also be considered nosy.

As a child he was very sensitive to the point of being scared of the crocodile of Peter Pan and the Evil Queen of Snow White; to the point that his mother took him out of the movie theater. He has a love of pirates and a strong dislike of clowns and mimes.

Being involved in law means that he does have a high sense of justice. Its this aspect of his character that drives him to unconver the events of the Shadow of the Temlpars (Circle Of Blood in the USA). He will talk to anyone and will press matters until there is nothing left to press. This can and will get him into trouble on many an occasion.

Unlike many other heroes, George chooses to use his wits and his mouth to get him out of trouble, rather than his fists. Comments George will most commonly hear on his travels include "What do you think you're doing?", "Don't touch that!" or "Put that back! / down!" to which George often finds himself replying "I can explain everything."

George is able to read Latin and is blessed with a "memory like a steel trap." Throughout his adventures he has impersonated a police detective (earning himself the nickname 'the Sewer Jacques') has impersonated a Doctor, has played the role of a stuntman, has stolen several priceless ancient artifacts, has been knocked unconscious by a large wooden salmon and traveled all over the world to many different countries. He has been arrested at least twice and has nearly been killed at least 12 times. A fact he's not afraid to bring up in conversation. George also claims that he could write an entire book on secret doors, referring to the fact that he has solved numerous puzzles in order to open hidden door mechanisms, both ancient and modern.

Despite his many experiences with the supernatural, magical and occult, George is still very skeptical about a lot of what he witnesses, although contrary to popular belief he is a theist, not an atheist. His lack of out and out belief however causes much distaste from his uncle who was a Christian priest.

George has made several acquaintances in different countries. This includes American couple Pearl and Duane Henderson, who regularly travel (Duane a supposedly undercover Agent for unknown government department/agency, allegedly the CIA) and the heavily-drinking Gendarme (later ex-gendarme) who George meets twice at the Café at Montfaucon, first in Broken Sword 1, then in Broken Sword 2 during his forced retirement.

Nicole Collard, a French freelance photojournalist first meets George shortly after the bombing in the first adventure. She and George share an intimate relationship that begins to wane at some point between the second and third outing. Eventually Nico and George's relationship is beyond repair. George moves back to the states and both he and Nico return to 'normal' life. They eventually get back together in The Serpents Curse.

Anna Maria Presa, a mysterious woman who turns up at George's office with a manuscript during the fourth adventure. She quickly becomes the new love interest. Filling the hole that Nico left, giving George the chance to once again do something outlandish. As well as giving Nico someone to be jealous of, putting her in George's shoes, similarly to his jealousy of André.

George has a host of enemies, beginning with The Neo sect of The Knights Templar, who he encounters more than once along his travels. He has fought in opposition of a drug baron, an Aztec god and recently small communities within the Roman Catholic Church.

George's social-nemesis is André Lobineau , a French history-scholar whom Nico has known since college and who (at least in the first two games) considers himself a competitor for Nico's affections. André runs an online history database, which George is blocked from viewing. Although George manages to hack into the website and access the information anyway.

In George's debut appearance, he is an average, friendly, and somewhat nosey individual taking a vacation in Paris that coincided with the bombing of the Café de la Chandelle Verte. George was thrown from the sidewalk by the blast into a world of adventure, risking his life, crossing a continent, stealing priceless artifacts and running his mouth in order to uncover the truth behind the attack. George falls for freelance photojournalist Nico Collard in the short span of time following the attack. Partnering up with Nico in order to help her to help him. Together, this unbeatable team aim to uncover the conspiracy behind The Shadow of the Templars.

One year later, George Stobbart returns to Paris, after leaving to tend to his dying father back in Idaho. Paris has changed, Nico is missing and George is more cynical, sporting a shorter straw due to his desperation to find the missing Nico. George is once again friendly and somewhat nosey, although this time around, The danger he was getting into is quite clear, unlike Shadow Of The Templars, in which he spent some time blissfully unaware to many of the impending dangers. This danger comes in the form of an ancient evil emanating from the Smoking Mirror located somewhere in Central America but this threat isn't waiting for George and Nico to come to it.

Sometime in the early 2000s, George has returned to his life away from Paris. No longer interested in the Bail Bonds system he makes money working for a patent office; helping designers perfect their idea prior to applying for a patent. He is called out to a remote area of the Congo to oversee the signing of a patent, where he is greeted with the brutal assassination of the man he was supposed to meet. Several clues lying around the man's office lead George into yet another adventure that sees him cross paths with Nico once more. George incidentally is also knighted and is now a member of the St. Stefan Chapter of the Knights Templar. The final confrontation with a familiar enemy unleashes the power of the Sleeping Dragon which both George and Nico have to stop before it's power consumes the world.

Broken Sword: The Angel Of Death

The events of the Angel of Death take place around two to three years after the events of 'The Sleeping Dragon', George and Nico are no longer a couple, adventure dried up and they both had to return to the real world. He is still coasting along as a patent officer, his repeated attempts to break into the bail bonds business have failed. His life is slowly coming to a standstill. One evening, he is greeted in his office by an unfamiliar woman - Anna Maria, who presents a manuscript to George, chaos ensues. And once again, George is thrown into another cat and mouse adventure spanning the globe. This time concerning the Catholic Church.

During the events of the Serpent's Curse, George now works as an art insurance assesor for the art exibition in Le Lizard Bleu. He meets Nico by chance, who's making a cover-up story for the newspaper she's working at. Their reunion is interrupted by a robbery, which resulted being the gallery owner dead and a painting stolen. George is called later by his boss Mr. Rickenbacker, who threatens to fire him if he doesn't retrieve the painting. His mission in finding the painting leads to another adventure involving Gnostics.

"That was almost a great idea. Almost".

"Stealing a flower from a corpse. How low had I sunk?"

The name "George" comes from the Greek name "Georgios" which was derived from the Greek word "georgos" meaning "farmer, earthworker". Although his occupation is not being a farmer, the other meaning is more likely to reference of himself travelling around the world. His name is referenced to St. George, a patron saint in England who is known for slaying the dragon. Near the end of the third game, this is reference in-game by slaying the dragon in Glastonbury Tor. "Stobbart" is a surname originated from Old English word "stubb" or "stubart", meaning "strong stump". The second syllable of "stubart" is derived from "heart" meaning "hardy", "brave" or "strong". This could be a reference of himself having courage to solve mysteries.

George's portrait from The Shadow of the Templars 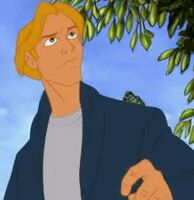 George's appearance in The Smoking Mirror 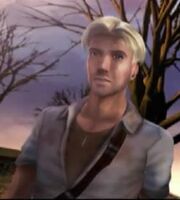 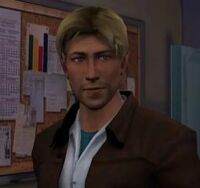 George's rugged look in The Angel of Death 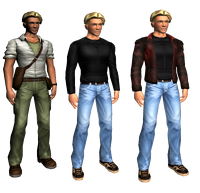 George's outfits in The Sleeping Dragon 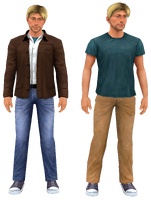 George's outfits in The Angel of Death