The Countess de Vasconcellos is a Spanish aristocrat whose family are suspected to be mixed in with the mystery of the original Knights Templar.

She is shown to be a very sophisticated woman, appropriate of an aristocrat. She is very proud of her families involvement with the Knights Templar and very protective of her family heirlooms. Before George Stobbart showed up she spent much time contemplating what could have happened to Don Carlos and the children.

We first meet the Countess when George practically breaks into her home in Spain. He garners her interest but says that if he turns out to be wrong, she will feed him to her dogs. George later uncovers many secrets at the Villa and manages to give her a new perspective on life. 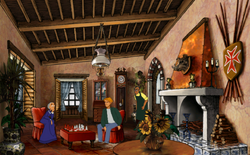 The Countess and George Stobbart 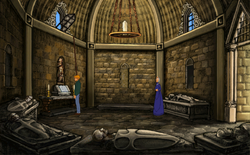 The Countess at the mausoleum.
Add a photo to this gallery
Retrieved from "https://brokensword.fandom.com/wiki/Countess_de_Vasconcellos?oldid=11800"
Community content is available under CC-BY-SA unless otherwise noted.